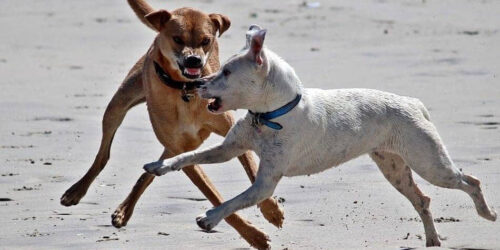 Dogs are pack animals where leading members rank higher in a hierarchy. To break your dog’s dominance, you must become the alpha dog yourself. If you let them reign supreme, they will assume they are the alpha dog and will constantly display their authority when their position is challenged.

Once they understand that they’re not the top dog in your home, you can start to break your dominant dog. A dominant dog poses unique set of problems when training and may show behavioral problems like ignoring your commands, jumping on you, and making messes all over the house. Understanding how their thinking process works will help you and your dog work together, not against each other.

You can tell you have a dominant dog by the amount the authority they demonstrate and their level of determination not to back down. A dominant dog poses unique set of problems when training and may show stubborn behavioral traits like ignoring your commands, jumping on you, and making messes all over the house. Understanding how their thinking process works will help you and your dog work together, not against each other.

All dogs have their moments now and then. But if your canine companion does all or most of these things, you may be dealing with dominance issues:

These tips can help you gain control of the situation:

Once he understands that you are the head honcho, training your dog will be much easier.

If you can’t get your dog to stop jumping on people, your real problem may be a dominant dog. These two dog behavior problems are more closely related than most dog owners realize.

Watch two dogs when they greet each other. They don’t jump all over each other the first time they meet, do they? No, each dog stands still and lets the other one sniff him. This is the doggy equivalent of shaking hands. It’s only after they know each other that they’ll run around and play together.

As I previously mentioned – dogs are pack animals, and every pack has its leader. One way the alpha dog asserts his dominance over the other pack members is to jump on them and put his front paws on the other animal’s shoulders. Is this starting to sound familiar?

The other dogs in the pack would never jump on the alpha dog. This is a sign that the other dog is challenging the leader for dominance. The leader has to respond to this challenge immediately if he want to stay the leader. Having said that, when you allow your dog to jump up on you and put his paws on your shoulders, you’re reinforcing his idea that he’s in charge, not you.

First of all, your dog should know the “sit” command. Always have him sit before you pet him. You’re the leader, and he should get attention on your terms, not his. If your dog is already jumping on you, the following dog obedience tips can help to get him under control:

Consistency is the key when training your dog. If one person in your home thinks this behavior is cute or is encouraging it, you’ll never get him to stop jumping. Everyone in your household must have the same goal, which is teaching your dog to be a well-mannered member of the family who knows where he fits into his world.

And what, you may ask, is “Small Dog Syndrome”? Well, we’ve all seen those annoying little dogs that yap non-stop, show aggressive behavior, jump up on people, snap at kids, and the list goes on and on.

In fact, most people really don’t care for small dogs because they have a reputation for just being unpleasant to be around.

Why is this? Are small dogs like yorkies really that bad?

It all comes back to the owners. People will accept behavior from a small dog that they would never tolerate from a big one. Why? Because they think it’s “cute.”

Here are the typical symptoms that associated with small dog syndome.

These and many other behaviors are symptoms of a dominant dog who believes he’s the pack leader. If your dog weighed 80 pounds, you certainly wouldn’t be putting up with this kind of behavior.

But people think it’s “adorable” when their little five-pound yorkie does it. Before you know it, your sweet little pet has transformed into a yappy, nervous demanding little monster who snaps at people for no reason. This is why small dogs have such a poor reputation.

Resist the urge to let them get away with bad behavior just because they’re cute. What’s cute when your Yorkie is an adorable ball of fluff won’t be so cute later on when he’s aggressively charging that rottweiler or snapping at the neighbor’s child.

Start obedience training right away. With any of the terrier breeds, it’s important to set boundaries right at the start and stick to them. Terriers were originally bred as hunting dogs who would dig into burrows and drag out animals like rats and foxes. They are very strong, intelligent, and determined animals who can very easily take over the house before you know it.

Don’t let your little pooch become a victim of Small Dog Syndrome. Start training him today, and he’ll become a well-behaved, much-loved member of your family.