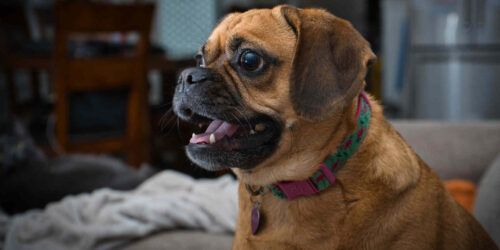 Alert barking is the kind of barking that mostly happens when the doorbell rings or someone knocks on the door, or when the mailman approaches. Alert barking is the main reason why people actually brought the dogs into their lives and homes so many years ago. Humans realized that dogs have a super hearing ability and that their ears are very sensitive. They can hear even the smallest sounds when approached and give us a warning.

So barking at the door, in a sense, is a good thing, and personally, I love it. I love the fact that my dog lets me know when someone is out there that I don’t know about. So alert barking is essentially a warning bark and it’s letting you know that something is not right. At the same time, it can get rather annoying if you can’t get it to stop. So, how to stop alert barking?

How To Train A Dog To Stop Barking On Command?

First off you’re going to pick a word that you are going to use on your dog for the speak command. Personally, I use “alert”, but you can say “bark”, “speak”, “woof”, or whatever feels right. So here’s what happens – we’ll need to do something to trigger an action and practice by giving a dog the speak command. I’m going to use the doorbell as an example, or door knocking because it’s very common practice.

So, I would go inside the house and stay there with my dog. Then I would have somebody on the outside to ring the doorbell. Doorbell rings and the dog starts to bark, just as expected. As soon as he does that, give him speak command couple of times.

Then what I’m going to do (while he’s barking), I’m going to take a very good smelly treat. That treat in my hand is going to go right down in front of his nose and I’m going to hold it there. And that’s when the magic happens – dogs cannot bark and smell at the same time. Don’t ask me why, but actually, humans can’t do that either – take a second and try to bark and inhale – you won’t do it, because physically it doesn’t work.

So, because I have a treat (apparently that’s much more exciting than barking) he has automatically stopped barking. And that is when you say the quite word. Remember, before we said the alert word, now – “quiet” (or whatever you have chosen to use on your dog).

And then we repeat. Someone’s on the outside knocking at the door, the dog starts to bark, you motivate your dog with the alert word, then get the treat. Here is the key – treat goes down and you put it in the front of his nose, you have to wait for two seconds, ok? That is critical. Wait for a minimum two seconds of quiet and then you give him the treat. The treat comes only after the quite word.

Depending on a dog this may take a while. Very important that you do this in real situations – the next time the doorbell rings for real because it’s the UPS man or the mailman, and the dog is barking – treat goes down. Wait two seconds – “quiet”. the You do this for two to three weeks and then you’re going to test it.

5. Test if your dog knows the quite command already

You’re going to test it once your dog is just hanging out with you. Get his attention and say your “alert” word – see if he barks. If he does then it means he’s got that part worked out. So now that he’s barking try the quiet word (oh, and here you can use whatever you want, i.e. “enough”, “quiet”, “hush”, or simply “shss”). And if he gets it – great!

Then go ahead and test it out in the real world. The next time when someone knocks at the door or the doorbell rings and he’s barking you don’t say the alert command, instead you just give your dog the quiet command. See what happens. See if he starts barking and if he does – great, give him a treat and reward him. Let him know that it was good, that what we wanted, and you continually reinforced that.

My dog keep barking at the door, what else can I do?

If he doesn’t do it then it means you need to practice more. You just go back to the same route of practicing the barking on command and practicing “treat trap” (go in front of his nose, let him smell it for two to three seconds and then say quiet). Give it a couple of weeks more and then test it again. Dogs usually pick up on this pretty quickly, because like I said before, treats are a much higher value than the fun of barking (for most dogs anyway).

As an alternative, and if you are really stuck with such behavior – try bark control device on your dog. We can recommend a device that will get the job done and keep your dog safe and unharmed (link here).

What are other ways to use bark and quite commands?

Eventually, once your dog knows quite and bark commands and you can use it outside, sometimes it can help with aggression issues. If you’re having leash aggression or leash reactivity then teaching your dog the “quiet” command is very useful. It can even help you stop your dog barking at a mailman or stop barking at whoever is in your car. There’s plenty life situation where the quite command will come in use.

Okay, so that’s our little alert barking, and the speak  and stop barking command. That’s exactly what it sounds like – your dog is barking because he’s bored. And if your dog is bored the only person we have to blame is ourselves.

In case your dog has been driving you nut with endless barking and you are out of options, then follow this in-depth guide on how to deal with barking neighbors dog.